A Guide to Lipoma Treatments

You’ve probably seen a lipoma before, even if you didn’t know what it is called. Technically, a lipoma is a kind of a benign tumor – one that’s made of fat.
It’s a slow-growing lump, one that’s usually located between your skin and the layer of muscle underneath. They don’t hurt, though – lipomas feel a bit on the squishy side and are easy to move.

They’re generally painless and easy to move, and you’ll easily be able to identify a possible lipoma if you’re able to move it easily with your finger.
Lipomas are frequently seen in groups. Many people, in fact, have more than one of these small bumps on their bodies. They’re not big – less than five centimeters on average – and they can be almost anywhere.

Most are found on the upper part of the body, though, especially on the stomach, upper back, and on the shoulders. It’s possible to have these growths on several different areas of the body, but they’re generally clustered relatively close together.

Want Proven Results for Natural Lipoma Removal? Click Here!
The scariest thing about this kind of growth is that it is classified as a tumor. The good news, though, is that most lipomas are entirely harmless. They are benign tumors, which does mean that they are non-cancerous. You don’t even technically have to get treatment as most people live with them just fine, though you can get the growth removed if you feel like it is impacting your life. 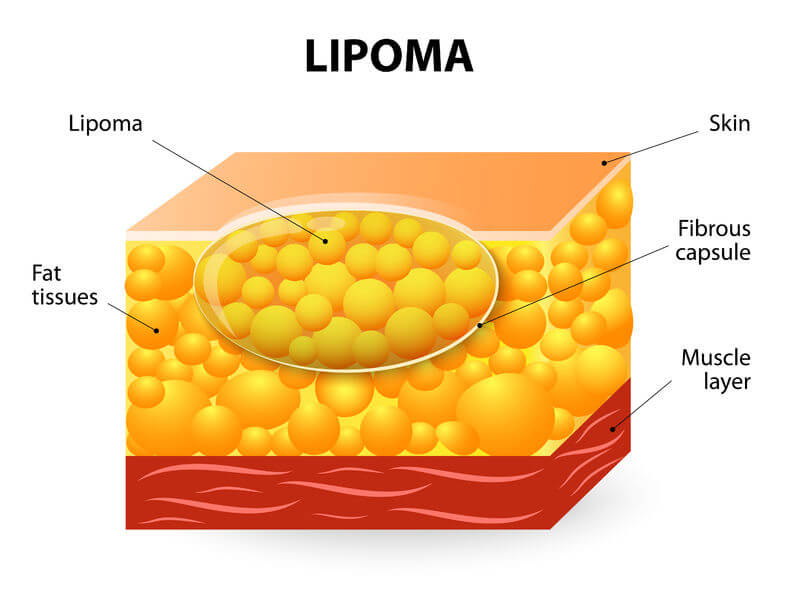 Sub-Types of Lipoma
The term lipoma, which dates back to the 18th century, is actually an umbrella term for several different types of related growth. Most issues are superficial subcutaneous lipoma, which follow the description above. There are, however, several other types. These include:

Identifying a Lipoma
How can you be sure that the growth on your body is a lipoma and not something more serious? To be honest, this really is something that you need to consult a physician to learn more about. If you want some peace of mind, though, you can look for the following symptoms:

– Depth: Lipomas are not deep under the skin. They’ll usually be found just under the skin.
– Location: Almost anywhere on the body, but usually on the abdomen, shoulders, and back. This harmless affliction are also commonly found on the arms and the thighs.
– Feel: Most masses are fairly squishy. You should be able to move it easily with your finger.
– Size: Most lipomas are small – under five centimeters, though they can grow over time.

Want Proven Results for Natural Lipoma Removal? Click Here!
If you have a growth that fits those criteria, there’s a good chance that you are dealing with a lipoma. These growths are generally identified during a physical examine, though sometimes your doctor may need to perform a biopsy to rule out the possibility of the growth becoming cancerous.

What Causes Lipoma?
Unfortunately, this is one of those medical issues that science doesn’t totally understand. No one knows exactly what causes the lipoma, though there are at least a few educated guesses.
We know, for example, that issue tends to be common within families – something that makes researchers assume that there might be some kind of genetic factor.

On the other hand, even those with no family history still get the growths. There are a number of other factors that make lipoma more likely, including a lack of exercise and obesity, but even those are not guaranteed to cause growths.

We also know that this issue is much more common as people age. In fact, most formation happens between the age of 40 and 60. It’s also slightly more likely to occur in men than in women, though we’re not really sure why. While we know to whom lipoma are most likely to occur and a few factors that make the occurrence more likely, exactly why they form is still a mystery that is being studied.

Should You See a Doctor?
This is actually a tough question to answer. For the most part, lipomas are fairly benign and they won’t cause you much pain. There are, of course, some types of lipoma that do require you to see a physician.

Even if you have a typical lipoma, you should see the doctor if you notice any kind of growth – after all, you definitely want to rule out cancer. If there’s no growth, you should still visit your doctor if your lipoma is beginning to cause you any other type of discomfort.

Types of Treatments
Again, you’re not necessarily going to have to get treatment for a lipoma unless it becomes painful or causes you problems in your life. Most lipoma treatment is entirely cosmetic, though some are removed in order to determine whether or not they are a particularly dangerous type of tumor called a liposarcoma. Unfortunately, the removal of the lipoma is necessary to make that determination because there is virtually no difference in how the two types of tumor present until a biopsy is performed.

The good news is that most lipoma removals are exceptionally simple. It’s just a simple removal – you will generally be under a local anesthetic for the procedure and should be out in under an hour. Once the removal has occurred, most lipoma – around ninety-eight percent – will never come back.

In some cases, surgery won’t be the ideal option. In these cases, lipomas are removed through liposuction. The good news is that liposuction doesn’t actually cause much scarring. The bad news, though, is that lipoma do tend to reoccur more often after liposuction than they do after surgery.

The Cost of Lipoma Surgery
There’s good and bad news about lipoma surgery when it comes to cost. When you’re having a single lipoma removed – or if the lipoma is causing pain – there’s a very good chance that the surgery or liposuction will be covered by insurance.

The bad news, though, is that lipoma surgery can be seen as a cosmetic procedure and thus might not be covered by insurance.
Lipoma removal can be costly, depending on where the lipoma is removed and what kind of aftercare you receive.

The low-end for the removal of a single lipoma is around $350, while many offices charge in excess of $1,000 for the procedure. This largely depends on where you have the surgery done, as plastic surgeons do tend to charge a premium for the process.

Lipoma Removal Naturally
The recommended course of treatment for a lipoma is surgery, but it is possible in some cases to see results if you choose a natural treatment. The vast majority of these treatments involve using natural ingredients in order to make ointments. Most choose ingredients that are astringent mixed with high-antioxidant oils. Neem and tumeric are common ingredients, as are flaxseed oils and teas.

Others choose to combat the issue by seeking to lose weight. As we do know that obesity is a risk factor for lipoma, this choice does seem to be well-motivated. Some choose to start eating organic, while others simply choose to count calories. In some cases, patients have success by increasing the number of fatty acids in their diets, while others choose to cut down on red meats. No matter what the home remedy, though, it’s not common to see any results for up to three months.

Lipomas are generally not dangerous. They can impact your life, though, and it’s important to know your options when it comes to removal. If you believe you have a lipoma it’s always a good idea to check with a physician to make sure that the lump isn’t something more dangerous.

Once you have a proper diagnosis, you can decide whether you need to have the problem removed or if it is something with which you can live.
SOURCES:
https://orthoinfo.aaos.org/en/diseases–conditions/lipoma
https://www.webmd.com/skin-problems-and-treatments/what-is-a-lipoma#1
https://www.realself.com/lipoma-removal/cost
https://www.wikihow.com/Cure-Lipomas-Naturally

Get your FREE "Product name" Guide

This site is a participant in the Amazon Services LLC Associates Program, an affiliate advertising program designed to provide a means for sites to earn advertising fees by advertising and linking to Amazon.com. Amazon and the Amazon logo are trademarks of Amazon.com, Inc or its affiliates.

0shares
Special offer for our visitors

Get your "Product name" Free Guide

We will never send you spam. By signing up for this you agree with our privacy policy and to receive regular updates via email in regards to industry news and promotions