Pearly Penile Papules? Not Me! Whether you’re dealing with everyday cosmetic issues like acne and pimples, or more chronic concerns like psoriasis and eczema, skin conditions can be frustrating at the best of times.
But while these flare-ups might cause a fair share of irritation, they’re also relatively simple to treat.
The regular application of a few OTC or prescribed medications combined with some smart, preventative steps can help you mitigate many of the more adverse reactions when skin disorders do arise.
However, when it comes to more sensitive regions of the body, understanding your symptoms and finding a suitable course of treatment can be far more difficult.

→I Want a Natural Remedy for Pearly Penile Papules Now! Click Here!←
This is definitely the case for any dermatological problem occurring around the genitals. One of the first questions you ask whenever you notice a bump, rash, or sore on your reproductive organs is whether you’ve picked up an infection, or even an STD. If you can see the possibility of sexual intimacy in the near future, then your thoughts will inevitably turn towards assessing the potential risk to your partner’s well-being, not to mention their reaction to your unsightly ailment.

At HealthFaire, we’re here to put your mind at ease about these concerns, which are difficult to discuss.
With that in mind, we’ve decided to tackle one of the most commonly experienced and widely misunderstood skin conditions affecting men today: pearly penile papules.

What Are Pearly Penile Papules (PPP)?

Have you recently noticed small, dome-shaped growths around the head of your penis? Are these minuscule bumps clustered circumferentially around the head of your penis, in one or more rows? Are the nodes themselves yellow, white, or of a similar tone to your skin? Then chances are you’re dealing with something known as hirsuties coronae glandis or more commonly, pearly penile papules.

→I Want a Natural Remedy for Pearly Penile Papules Now! Click Here!←
While many of us are taught to raise the alarm bells at the first sign of genital abnormality, the first thing you need to know is that pearly penile papules are completely benign, and pose no risk whatsoever to your health. Although, scientists still aren’t sure what causes pearly penile papules, you can rest assured that they will not occur due to poor hygiene, sexual activity, or any other type of infection.

Also, it’s important to note that you’re far from the only person with these growths, according to latest statistics anywhere from 8 to 43 percent of all men report incidences of PPPi.

Are There Any Clear Symptoms of Pearly Penile Papules? 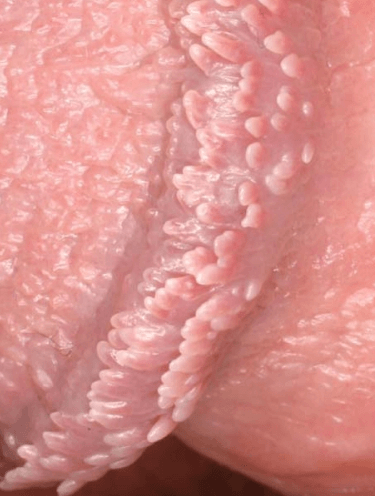 The first thing to note here is that pearly penile papules are asymptomatic, which means they don’t produce any discernable effects on sufferers. The size, shape, and color of PPP bumps can also vary significantly from one person to another, however any individual’s particular form of PPP will be uniform in appearance. In general, penile papules are around 1-4 mm in diameter, and completely smooth to touch.

Penile papules are not restricted to any single race, age, ethnicity or geographic group, but they are more commonly seen in uncircumcised men. Pearly papules usually develop around the ages of 16-40, although they can manifest immediately after puberty in some instancesi. Due to the size of penile papules, men may not even realize they carry them until later in life. In general, it’s good practice to check your genitals regularly for unfamiliar blemishes and bumps, even if they ultimately turn out to be harmless.

PPP can be diagnosed by dermatologists and physicians through a simple visual inspection. Most specialists can use this preliminary assessment to rule out a number of alternative conditions, however mistakes do happen, around 12 percent of doctors misdiagnose PPP as genital warts during their initial inspectionsii.
To confirm a diagnosis, physicians can check a sample of the skin under a dermatoscope. Despite superficial differences, all incidences of PPP reveal standardized features at microscopic level.

How Do I Know I Have Pearly Penile Papules?

With more than 1 millioniii STDs acquired every day, it’s more than fair to ask yourself whether your pearly penile papule might be a symptom of more serious disorders. In fact, 20 percent of PPP sufferers do mistake their symptoms for an STD at first sightiv.

If you’re looking for a guarantee, we always recommend visiting with a trained dermatologist or your primary healthcare provider. But if you’re looking for immediate assistance, we can definitely provide some guidance to help you differentiate PPP from some other genital conditions.

There are a variety of cancers which can grow from the skin cells of the penis. While a layperson will have difficulty identifying particular types of penile cancer, this brief rundown should provide some guidance if you’re struggling to distinguish between benign penile papules and cancerous growths.

Unlike pearly penile papules, skin tags don’t show up in neat rows across the penis head, instead they’ll usually manifest in a disordered pattern in any area of the penis. While penile papules will hold their shape, skin tags are soft and droopy in appearance.

There are a couple of other benign conditions which can be commonly mistaken for pearly penile papules.

A study published in the International Journal of STD & AIDS revealed that more than a third of men experience significant stress over their penile papules, while a further 25 percent of those affected admit embarrassment over their bumpsv. At least three-quarters of men with bumps larger than 1mm indicated that they wished to pursue pearly penile papule removal.
If you count yourself amongst this number, then you should know that PPP has been shown to regress and become less noticeable in later life, according to a 2009 UK studyvi. Of course, if you’re dealing with the psychological and social ramifications of PPP today, this statistic may be scarce consolation. With that being said, you’ll be pleased to know that there are several proven pearly penile papule treatments available on the market today
Let’s take a closer look at some cures you may come across in your research and see how they work.

Importantly, most mainstream health care providers caution against PPP removal for the simple fact that these growths are completely harmless and pose no risk of further complications. However, where patients feel that the impacts of penile papules are significant enough to merit treatment, there are a few recommended courses of action.

A trained dermatologist will assess the depth of your penile papules, and then target these nodes with an extremely accurate CO2-powered laser. Topical anesthetic cream is applied before the procedure so the treatment is virtually painless. After lasers have been passed over the affected areas, the related papules should simply dissolve away. Although there is some redness, irritation, and scabbing immediately following the procedure, a full recovery can be expected within one to two weeks.

A device called a hyfrecator is used to generate a targeted pulse, which burns off the papule cells one by one. Because this procedure can be quite painful, an anesthetic cream is applied beforehand. Electrosurgery can cause scarring and reduced sensitivity in some instances.

Targeted, high-energy emissions from a Gamma Knife are used to burn off PPP tissue. Because these emissions produce less heat, the resulting scarring is also minimized.

If the time and expense of doctor’s appointments, surgery, and recuperation don’t appeal to you then you can opt for a variety of noninvasive home treatments which may accomplish similar results.

Yes, common household toothpaste is considered by many to be an effective tool for PPP treatment, in particular white, nongel-based toothpaste is recommended for optimal results. The concept behind this remedy is that fluoride in toothpastes works to dry out the natural oils beneath the penile papules. By applying the solution to the affected area on a nightly basis and washing it off in the morning over the period of two to three weeks, the papules are supposed to shrivel and eventually fall off.

There are a host of essential oils which possess natural antimicrobial and anti-inflammatory properties. Many of these oils are used to treat skin conditions such as acne and athlete’s foot as well. Here are some that are most commonly used for PPP. Get your FREE "Health Is Wealth" Guide

0 shares
Special offer for our visitors

Get your "Developing Proper Health and Hygiene Habits" Free Guide

We will never send you spam. By signing up for this you agree with our privacy policy and to receive regular updates via email in regards to industry news and promotions